Yesterday I started working on the React Native Fundamentals course at egghead.io mentioned below in the quote. During that initial foray I encountered the "ERROR Watcher took too long to load" error that I talked about here. After I fixed that error I was getting a warning in Xcode that I'm going to talk about today.

No non-expired provisioning profiles are installed...

This was one of the errors that I received as I was initially following along in the first video of the series. Prior to this course I hadn't purchased an iOS Developer Program membership, as I hadn't been doing any iOS development. Given the release of React Native, I decided that it was well worth it to purchase a one year iOS Developer Program subscription. With my new subscription in hand I elected to fix this particular error, as I like to remove errors as I move through a project, such that I can focus on the project to my fullest extent.

When I clicked on the "Fix Issue" button in the previous image, I was shown the more detailed error message as seen below.

After a little bit of searching I found this article on Apple's developer website, which stated that

Xcode requires one or more registered devices in your account before it can create a team provisioning profile.

The document above also outlined the steps to get my device registered. First I had to select my iOS device, which was plugged into my Mac, from the Scheme toolbar that had started out with an iPhone 6 Plus simulator selected as seen below. From there I clicked on "iPhone 6 Plus", which expanded into the drop down shown below where I selected "iPhone". 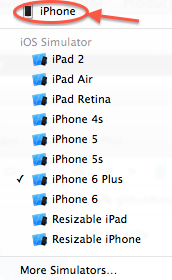 Once I had selected my iPhone from the drop down I clicked on the "Fix Issue" button as seen in the following image.

My identity issue for this application was resolved after performing these steps, and I have a non-expired provisioning profile installed. Now I can continue to move forward with the React Native Fundamentals series!